Become a member for free 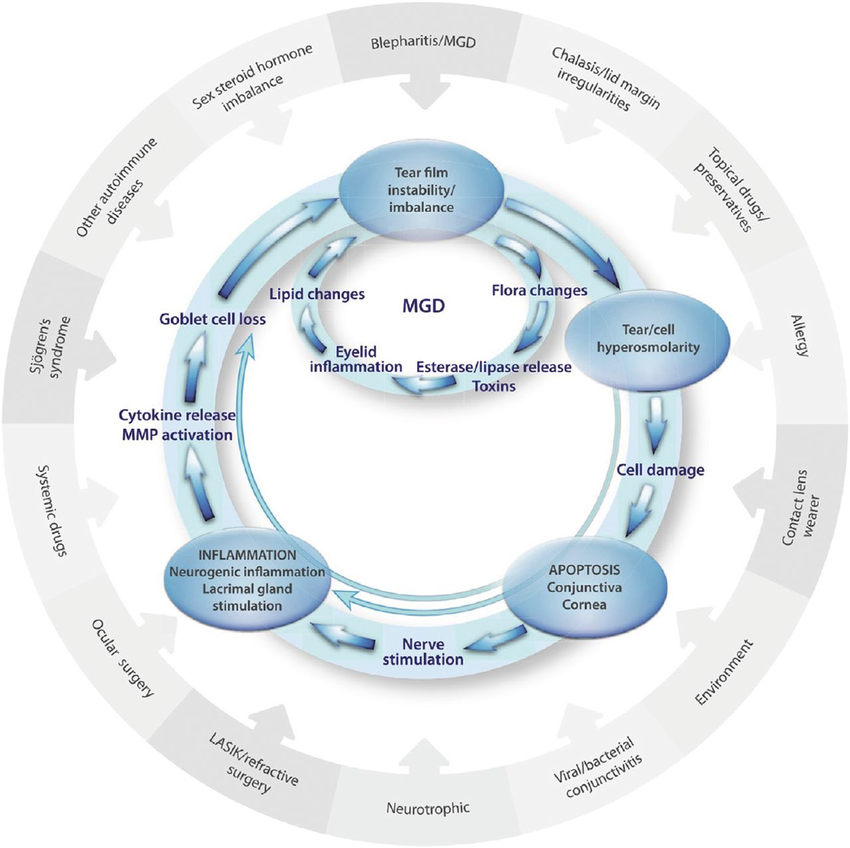 The ocular surface encompasses a group of structures and tissues protecting the intraocular milieu from the continuous aggressions of the environment. The eyelids, tear film, surface epithelia, lacrimal glands, complex immunoregulation and trigeminal nerve sensation participate in these protective barriers. As they are relatively redundant and independently regulated, partial impairment of the defence barriers may be compensated by other protective systems and cause limited clinical consequences. When all barriers are impaired, however, or when the last defence is compromised, the ocular surface loses its ability to recover after any, even minor, environmental stress, and the ocular tissues enter a chronic pathological state in which the altered epithelia, immunoinflammatory cells and corneal nerves stimulate inflammation, which further degrades the tear film and causes additional tissue alteration, eventually acting as a self-stimulating vicious cycle.

The concept of vicious cycles in DED

In the last two decades, new definitions and new concepts have been proposed to assist in explaining the complex pathogenesis of Dry Eye Disease (DED).  However, it often remains difficult to fully understand how so many independent and totally heterogeneous disorders of the ocular surface could lead to an apparently singular disease. Hyperosmotic stress, inflammation, neurosensory imbalance and non-ocular systems such as immune sensing and microbes have also been described as major players in what eventually manifests as the inability of the ocular surface regulators and protective barriers to properly operate in the face of environmental challenges, especially under adverse, highly variable conditions.

It remains difficult to comprehend the large field of etiologies causing dry eye and the complex biological dysfunction that results in an apparently common disease. This was the basis of the “vicious circle” theory, first evoked by Rolando (1,2), then proposed by Baudouin (3) and adopted by the DEWS in 2007 (4), although slightly modified from its original version (3).

This new mechanistic schema of DED was aimed at completing the classic etiological approach and proposes two levels of ocular surface impairment, with traditional etiologies defined not as independent diseases but as risk factors and/or entrance points into a self-stimulated biological process involving the entire ocular surface and its regulators.

This mechanistic approach proposes a global combination of mechanisms, with two levels of ocular surface impairment, the first level including many possible acute or chronic causes that favor or trigger the disequilibrium, possibly reversible if correctly and specifically managed whenever possible, followed by the secondary involvement of a series of biological cascades centered around tear film imbalance and inflammatory stimulation, finally acting as an independent vicious circle, regardless of how the patient entered the loop.

This concept of a vicious cycle may explain examples of DED occurring after ocular surgery, contact lens wear, chronic allergy and systemic or topical drugs, which can become chronic even after all causative factors have been suppressed or spontaneously disappeared. This proposed schema should be considered as a basis for further reflection on biological mechanisms and future therapeutic approaches.

Figure 1: The vicious circles of DED (from ref. 5)

Whether inflammation is a primary process causing the disease or a secondary event amplifying the ocular surface impairment is still debated. It is likely that the two mechanisms may explain different pathways into the vicious circle and that inflammation rapidly takes on a central role in sustaining the pathological state.
In addition, tear hyperosmolarity may cause a direct stress to ocular surface cells and act in a vicious cycle either as a primary or a secondary event. Recent findings show that hyperosmotic stress may stimulate inflammatory processes and cytokine release (7).

Conjunctival epithelial cells certainly play a role in the process through their ability to express inflammatory cytokines and their receptors. This cytokine expression has been used to measure inflammation in the ocular surface when clinical inflammatory signs are not obvious, such as in dry eye syndrome, a seemingly non-inflammatory disease, as well as to monitor the effect of immunomodulating strategies (8).

Meibomian dysfunction (MGD) is one of the main causes of dry eye, through the combined mechanisms of tear hyperevaporation and inflammation of the ocular surface. However, its pathophysiology and classification remains imprecise, and the intricate relative roles of the eyelids and tear film remain unclear, even in the attempts at definition proposed in international consensus conferences. In 2011, the International Workshop on Meibomian Gland Dysfunction (MGD Workshop) (9) proposed the following definition:  “Meibomian gland dysfunction (MGD) is a chronic, diffuse abnormality of the meibomian glands, commonly characterized by terminal duct obstruction and/or qualitative/quantitative changes in the glandular secretion. This may result in alteration of the tear film, symptoms of eye irritation, clinically apparent inflammation, and ocular surface disease.”

Recognized as the most common cause of hyperevaporative dry eye, MGD also plays a role in hyposecretory dryness (10). Many causes can lead to this type of condition, the pathophysiology of which is difficult to explain with a single, unifying theory (11), and, while MGD is often diagnosed in response to severe complaints directly related to dry eyes or inflammation of the eyelids, many cases are noticed simply during a systematic examination, without any particular complaint.
To account for the complexity of these multifaceted diseases - infectious, skin-palpebral, metabolic, lacrimal, and corneal, the schema deserved to be redesigned (12). It appears as a double vicious circle, both of which combine into one circle in chronic forms (Figure 2). By definition, each mechanism can be an entry point into the circle, but if one starts from Meibomian dysfunction, whether it is linked to hyposecretion, to abnormal secretion of the meibum or to an obstruction of the glands, the abnormal glandular content promotes proliferation of saprophytic germs, staphylococci, p. acnes, or parasites, Demodex folliculorum and brevis. Demodex also harbor bacteria and probably promote their proliferation [13]. However, these bacteria release enzymes and toxins, in particular lipases and esterases, which modify the melting temperature of the meibum, promoting its stagnation in the glands, thus reducing its secretion onto the surface of the tear film, altering its quality and constituting a nutrient substrate and poorly mobile medium favorable to bacterial proliferation. This is how the first self-sustaining loop closes.

However, the absence of normal meibum, necessary for the quality of the tear film, is a source of dry eye due to tear instability, with its attendant hyperosmolarity and inflammation. But the missing link between tear inflammation and eyelid involvement is the activation of keratinization enzymes (cornification enzymes), which hyperosmolarity and inflammation activate (14) at the eyelid margin. The direct consequence is obstruction of the glands, atrophy of their ducts and, therefore, blockage of secretions, with stagnation of the Meibomian contents thus creating a direct link between the two vicious circles.

In total, as such a complex disease, a disease that hides behind variable titles, dry eye syndrome or gland dysfunction, or is integrated into skin diseases such as rosacea and seborrheic or atopic dermatitis, MGD has so far not found a perfect classification scheme. A superposition of mechanisms and signs does not make a disease, but the diagram proposed here creates the bases, orders the mechanisms, unifies the pathophysiology, identifies the potentially dangerous consequences for the cornea and vision, gives the bases of treatment, and, in short, may give a “real disease” status to what is not a simple, banal, benign "dysfunction." 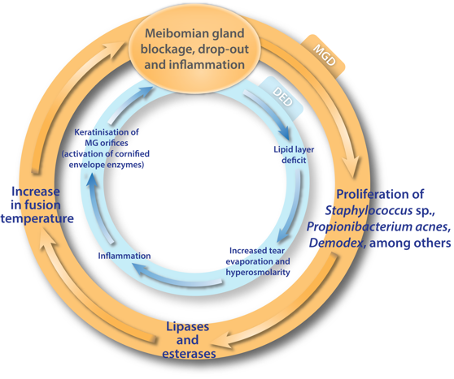 New schemas, what for?

These proposed schemas should be considered as a basis for further reflection on biological mechanisms that could be even more complex but individually constitute potential targets in therapeutic strategies. Beyond its educational and scientific interest, this type of diagram can be useful in understanding the mechanisms of the disease, identifying its complexity and its various levels, sometimes even its origin, as well as trying to target and direct therapy (Figure 3). 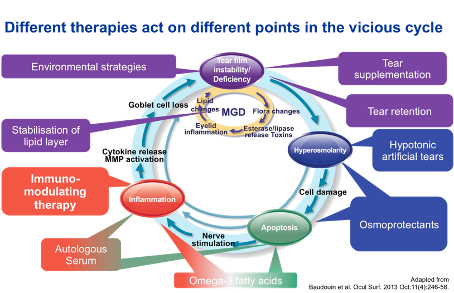 Back to the resources